Showpad, the company I work for, hosts Meetups quite often. For the meet-up of SocratesBe I tend to be the person doing preparations and I am also in charge of ordering the food.

I remember the days there were only a few people joining the meet-up, and ordering the food was a breeze; asking people personally what food they want, placing the order, collecting the money.

As the SocratesBe group became more popular, more people started coming to the meet-ups, which is a good thing, obviously. Though, the ordering of the food became a hassle. Ever ordered food for 20 individuals and collected the money? It's a drag!

Two days before the meetup, I expressed my concerns about this issue on the Slack channel of SocratesBe. A clever man suggested to start my own pizza chain or maybe write some software to ease the task.

Starting my own pizza chain was not high on my priorities list and I doubt if I'd ever be free to join the actual meet-ups again in that case.

I had already tweeted the food delivery service we use to ask if they had a solution to this problem. I assumed we weren't the only ones with this issue. Sadly they did not reply. The actual tweets (in Dutch)

So if I wanted to improve the order process, I'd had to go with "write your own software"….

Make it easier for a person to manage food orders for a group (order input, payments, status,…).

There are 3 main parts to this application; authentication, a backend to store the data and a frontend to put in and present the orders.

As I was developing this for a meet-up, using Meetup + OAuth2 is the logical choice for authentication.

I've been using Angular 1 a lot for projects and Angular 2 just went in beta, so I decided it was about time to write some Angular 2 (and TypeScript).

I did not want to invest time in writing a backend to store my data so I was in need for a "datastorage as a service" thing. I remembered reading a tutorial on Angular 1 and Firebase once, so I decided to try out Firebase…

As I mentioned, I have no experience with Angular 2 or TypeScript. So prototyping an app using Angular 2 would be quite a challenge. Also, as it's only in beta stage, there isn't too much documentation and but there are a fair amount of good tutorials available already.

I've never used Firebase before, but I wasn't really expecting much trouble on that side.

The biggest challenge would obviously be time. Only 2 days until the meet-up and I have a full-time day job, so I was left with 2 evenings to write code.

I signed up for a free account on Firebase, I did not take the time to check the limitations. I'd figure out a solution for those if I'd run into any.

Creating an OAuth client in the Meetup API was straight forward as well.

Next step was to start thinking about the code. I knew Angular 2 prefers JSPM to get things working, but I was not really familiar with it. I did not want to waste my time on figuring out how to set up my dev + production build process with JSPM I decided to just look for an angular starters pack.

I had some starter packs bookmarked since they were showing up in my Twitter stream quite often. I went for ng2-webpack by Olivier Combe as I was already quite familiar with WebPack and his repo had the dev and production build process set up and had some useful example code available (bootstrapping, routing, …).

The first thing I wanted to implement was the authentication. Authentication from a JavaScript app using OAuth seemed pretty straight forward, I had done this before; use the implicit flow, provide my app key and redirect url and ask for an access_token.

Sadly, it didn't go as smooth as I hoped for. I ran into 2 problems.

First, Meetup did not allow me to use localhost as a redirect url. As webpack's dev server runs on localhost:3000 this was a problem. I ended up solving this by implementing more code than I intented to; I added storing the access_token in LocalStorage, this way I could run my code on production, get the code from LocalStorage and use it locally. There was one up side to this; this way I already implemented some "remember me" functionality.

I did not think about how I'd host my frontend, luckily Firebase provided some hosting with the free account I had, and they have a great CLI tool. After some configuration I only had to run npm run build && firebase deploy to get my code on production.

The quickest solution I thought of, was creating a proxy script and running that on my VPS (kind of stupid hosting my frontend on Firebase but still having to use my VPS in the end). Not the greatest solution, but I was able to solve my issues quite quickly this way.

Next step was linking the app with Firebase. Although Angular 2 is only in beta for about 2 weeks, somebody already created angular2-firebase. Thank you, Kyle

I was not familiar with observables yet, still I was able to create some sort of DataStorage service. (This great blog post came just too late: Taking advantage of Observables in Angular 2)

With these basics implemented, I could start working on the app functionality.

This is when the real Angular 2 fun started, adding routes, creating components, writing views with the new template syntax:

Once I had basic functionality to create groups and add orders to groups I could start adding in some "administration" functionality (order statuses, payment statuses,…) and some quick wins for the people ordering (remembering the groups they visited, removing orders,…)

This is what it looked like in the end: 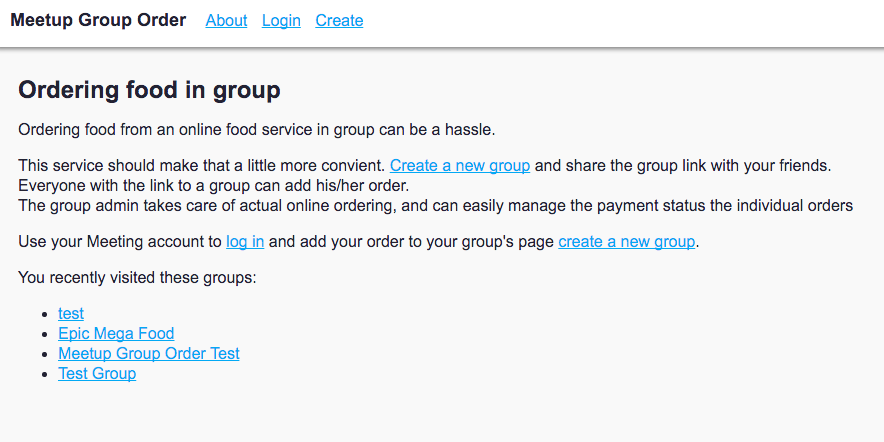 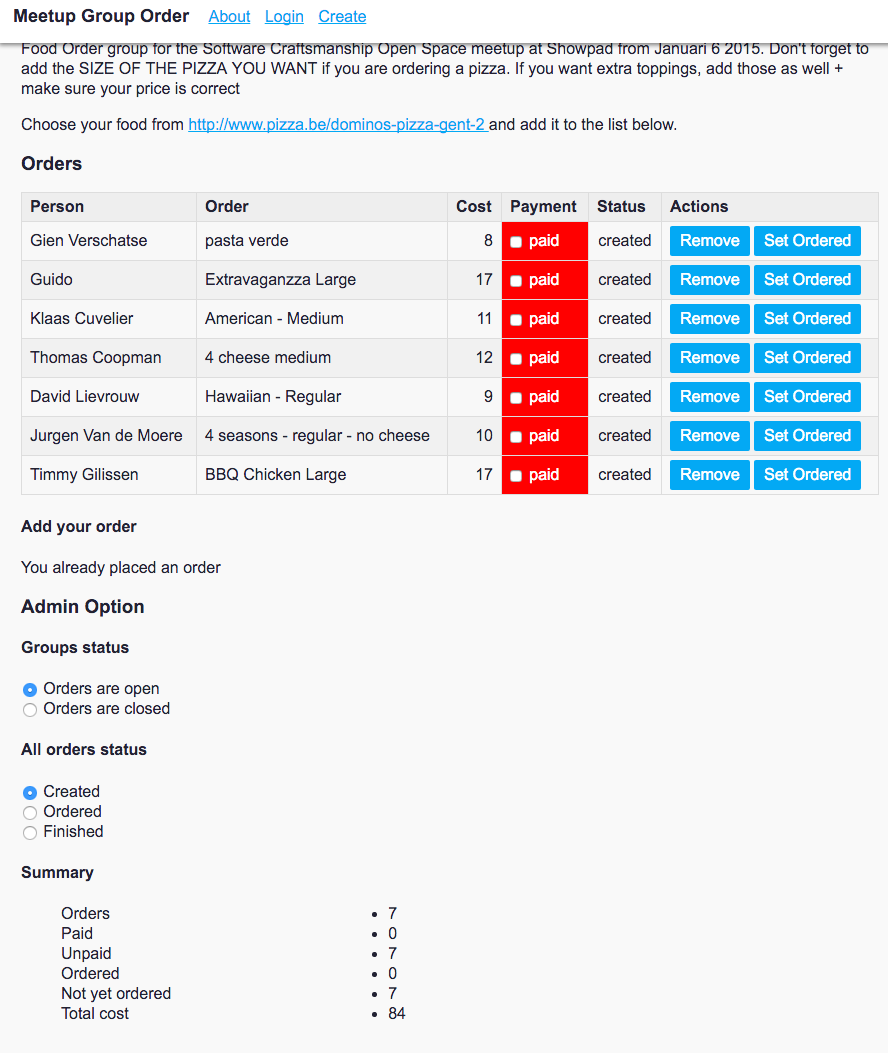 Definitely not a masterpiece of UX, but surely good enough to ship and try out on the meet-up.

I posted the link to my order group on the Slack channel on the day of the meet-up, and people could start adding their order during the day.

It was still hard to copy over the orders to the actual food order service, but at least it the orders and the payments were manageable this time.

Goal accomplished! The tool did its job!

(To be honest: 1 order was wrong but that was totally a human error, not the tool's fault).

I used the SocratesBe meet-up to give a lightning talk about this challenge. It turned out explaining everything in 10 minutes was even harder than finishing the project in time. 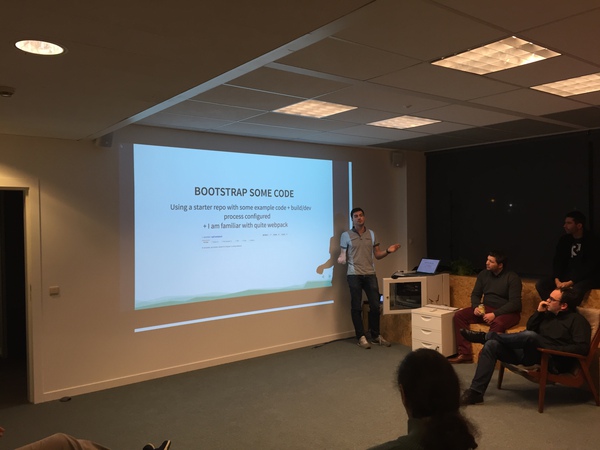 Looking back on the challenge

I was able to pull this off in under 8 hours, which I am still pretty impressed with myself. Shortcuts have been taken but the challenge was not to build a perfect app. The challenge was to create a tool in a short amount of time with services/tools I was not familiar with.

The security of the app is not great; I did not configure Firebase correctly, now everybody can read and write to my instance (people could mark their order as paid without paying). Authorization itself isn't very secure either, before doing some data related actions, I check if the logged in user from Meetup matches the owner of a group or an order, which could by bypassed pretty quick as well.

I guess ideally a "real" backend should be used; it would take care of the CORS issues with Meetup, I could use JWT for authorization and I would not have to expose any of my credentials…

I probably could have easily solved the Meetup redirect issue locally by setting up a host in nginx with proxy_pass, which I've actually done before, but I did not think about it at the time.

The code is available on Github ng2-group-order, but keep in mind the purpose of this challenge… This is not the sort of code I wrote in my day job.

I was quite hesitant about TypeScript in the beginning, but I really loved writing typed code and taking advantage of the decorators!

It's too soon to form an opinion on Angular 2, but I definitely liked writing this app using it.

Hope you enjoyed my write-up. Don't hesitate to contact me if you have any questions or remarks!

Also want to get started with Angular 2?

There are already quite some tutorials available, but definitely check out the ones by Thoughtram, they are great!

I've used webpack myself to build my little app, there are more options, but this proves you're not tight to JSPM. I used ng2-webpack and I was very happy how easy it was to get started (and keep using it when adding extra functionality).